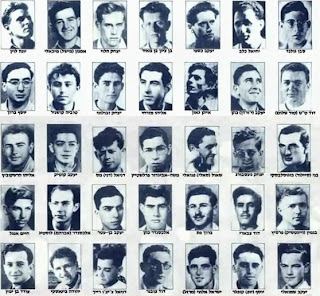 Sixty-five years ago, on 15 January 1948, Israel was fighting for her existence. South of the city of Jerusalem, the kibbutzim were surrounded, grossly out numbered and running out of supplies.

In an attempt to bring much needed supplies to the besieged Etzion Block (known as the southern gateway to Jerusalem), thirty-five young Haganah soldiers (most of them students at the Hebrew University) set out at night, laden with packs of ammunition and supplies. The soldiers were spotted, and ambushed. They battled valiantly for hours, but in the end, the entire company was was slaughtered and horrifically mutilated by the Arab attackers.

The bodies were buried in Kfar Etzion two days after the battle. Twelve of the men were so badly mutilated they could not be identified. Rabbi Aryeh Levine, considered to be the Tzaddik of our time, was given the task of performing a goral haGra (haGra is the Vilna Hagaon), an ancient form of lottery which only a few individuals in every generation are capable of performing. Before the lottery begins, various prayers and psalms are recited. The person who performs the lottery states what he wants to know.

Through a process of randomly opening up Tanach (the book containing the Five Books of Moses, Prophets and Writings) and paging through the Tanach, the person opens to a sentence which gives a hint as to the answer to his question. For example, when Rav Aryeh Levin wanted to identify which grave held the remains of Binyamin Bogulevsky, he opened the Tanach to the words "u'mateh Binyamin b'goral" (...and the tribe of Benjamin by lottery...Joshua 21:4). The grave of Eliyahu Hershkowitz was revealed through the words "va'yikach Eliyahu et ha'yeled" (...and Elijah took the child...Kings 1, 17:23). This was done for all of the unknown, and it was said that the families all agreed that the rav had identified them correctly. 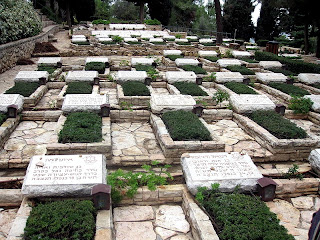 Four months following the tremendous loss of the Lamed Hei, the State of Israel was declared. In August 1949 a group of former Palmach soldiers founded a kibbutz, Netiv Ha'Lamed Hei (path of the 35) near the route of the Lamed Hei. On the 10th of the Hebrew month of Mar Cheshvon, 02 November 1949, the remains of the Lamed Hei were re-interred in the military cemetery on Har Herzl in Jerusalem.

There are now more than twenty Jewish settlements spread out all over Gush Etzion with a population of more than 20,000 Jews. The prophetic words "v'shavu banim l'gevulam," (and the children will return to their borders) have become a reality.

Toldot Yisrael  tells the tragic yet inspiring story of these Haganah soldiers who gave their lives in 1948, and became known at the Lamed Hei (the Thirty Five)

I don't know if there was any company in the Israel Defense Forces or in any army in the world that assembled such splendid manpower, pure bravery, and spiritual abundance as this company, who will forever be known by our people as the "Lamed Hei" (the thirty-five)...These lions of Israel were a mix of youthful spirit and glory, superior wisdom...and bravery fiercer than death...David Ben Gurion