How Far Can You Run in Fifteen (15) Seconds?

Free Speech is Being Snatched From Under Our Noses...

A Crises of Free Speech~Pat Condell Tells it Like it Is! 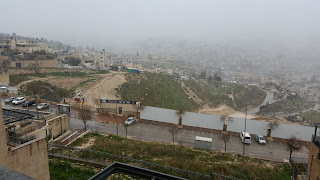 We rarely have the joy of seeing snow that stays in Jerusalem. The last real snow was in 2015 and it was glorious~for most of us.

Those of you living in cooler climates would have a real laugh if you were here.

Just the thought of a few flakes of snow and the country is ready to shut down. People rush to stores for supplies, shops announce closing (those that are even open) and the news coverage is almost as if we are in the middle of a disaster.

My friend lives on the other side of the valley to the left of the picture above. She had an entirely different view...as well as a lot more wind! You can view her video HERE.

I was able to catch a few flakes on my phone before it stopped. If we get lucky overnight I may wake up to a white blanket covering our area.

I See The Light~Shulem ft. The Maccabeats

As We Light the First Chanukah Candle...

Let Us Remember The Modern-Day Miracle of  Chanukah

Side Street Next to Shuk

Walking from Jaffa Road to Agrippas on the street next to the Mahane Yehuda open lane. There are many original shops but most are closing or being sold to be torn down. It is a pity as the character of the shuk is in the original shops.

There are not many stores open in the market on Sundays. The vendors are mostly trying to sell the produce left over from Friday. New stock comes in Monday and Tuesday. People still shop but it is not as crowded. I like to walk the small side lanes as the tiny shops have many interesting things. Many of the vendors have had caricatures done by local artists. My camera was not in focus~sorry about that! I need more practice!

A Rainy Day In Jerusalem, Israel...

Even in the rain I enjoy the view from my balcony. From the left is Jabel Mukaber, then Har Habayit, Har Zeiteim, and moving along to the security wall. Around 1:25 I zoomed in to enable a better view of Har Habayit. The houses below are more of the village. The land scraped bare at the bottom of the video is the beginning of the new apartment complex being added to my community. It stretches all the way to the right which is blocked by the buildings below me on the next street.

Aliyah is the greatest thing a Jew can do~But if they want to be successful they need to be prepared for a totally different lifestyle than in their originating country. Here is a short discussion and some observations as to why (many) new olim are unable to make it and end up going back to where they came from.

A short walk along HaDror street in Mevasseret Tsyion, Israel. The new medical facility has been operating for some time and is in a very convenient place. The traffic circle with the olive tree in the center was put in before the medical building was complete. An interesting fact~in Israel when they have to take down an olive tree they carefully dig it out and re-plant it as in this case.

What Will A Biden Presidency Mean for the Middle East?

My friend is mostly housebound due to ongoing chemotherapy and the Covid risk. One thing she does do a lot of is podcasts in both German and English. Here is one we did the other day. You can go to her YouTube site to see more of her posts or to her blogs Shearim in English  and Hamantaschen in German.

Join the conversation via comments, or watch for future podcasts and follow along...Enjoy!

On 09 August 2001, the Sbarro Pizza Restaurant was packed with happy people~families, singles, fathers, mothers and children of all ages enjoying a lovely afternoon.
Located on the corner of King George and Jaffa Road, one of the busiest intersections in Jerusalem, the popular eatery was packed. It was a Thursday, and people were gearing up for the beginning of Shabbat the next evening.

The day turned black when two terrorists decided it would be a good idea to set off a dirty bomb. The details are available on Wikipedia.

In Jerusalem one often knows the victims, or, the families and friends. Two of the tragic cases I have some knowledge of.

Almost all of one family, the Schijveschuurders, were murdered. In the blink of an eye, a father, mother and three children aged 14, 4, and 2 were taken from this world.

Two other children survived with lifelong crippling injuries, They, and the remaining siblings who were not at the restaurant, suffer lives of ongoing pain and trauma.

In addition to the fifteen murdered, 130 people suffered disabling injuries. One of them, Chana Nachenberg, 31 at the time, remains in hospital on a respirator 24/7, connected to a multitude of machinery, in a vegetative state until this day. Her two year old daughter, somehow survived without a scratch. She does, however, suffer an invisible injury~living with the horror of that day, knowing her mother did not die, but in reality is gone forever, and seeing the daily strain on her father.

The vile female who scoped out the site, and delivered the terrorist with his bomb, promptly left before detonation. She was of course tracked down and jailed~where she collected her monthly "payments" for the killing Jews. When interviewed, she showed no remorse, rather, she was thrilled to learn that eight of the murdered were Jewish children.

Sadly, our government decided to free her among the thousand plus exchanged for Gilad Shalit who was held by Hamas. Many Israelis are still angered by the submission of our officials. Terrorists freed to kill again~and they have.

This vile female (may her name be erased) relocated to Jordan where she is able to spread her venom and bask in the adulation given a hero, for her participation in the attack and murder of Jews. The more dead Jews, the higher the payment...

Now, this murderer has been pleading, via a Jordanian radio station to be reunited with her "convicted terrorist" husband. Apparently Jordanian radio pulled her broadcast, but no matter! The BBC, on a program called "Trending" broadcast her situation around the world as part of their "World Service". They have given her a platform in an effort to create sympathy for her vile cause. It seems that murdering children is OK~as long as it is the "right kind of children~ie; Jews" (wink, wink).

Sometimes in life there are just no words and I have none that can be written down here. So I ask you to watch the below video and listen to the father who lost his beloved daughter. See what the BBC, who I thought to be a public funded broadcaster, thinks is appropriate to support. This is not what I consider to be "unbiased" broadcasting!