Why Is The World Fascinated With Psychotic Losers?

The latest tragedy at a gaming convention should have everyone asking questions. This was not a convention of "violence" and "blood-thirsty slaughter".  Who could have predicted that a sore loser would end up shooting up the place?

What it boils down to is a young man who could not face the fact that he lost a game. As always, there will be a myriad of different reasons for this mindless, senseless killing of innocents and the injury and trauma dealt out to many more. Will anything change? Will there be more killings to follow??

I feel strongly that this young man, as with others of his ilk, should be branded for what they are, "Losers", and their picture should not be shown around the world without the "Loser" stamp firmly fixed across their faces. Stop making murderers into "tortured souls" . Stop elevating them to something they are not. Until we pull the celebrity status of vile people and refuse to allow them or their memory to gain anything other than contempt, it will not change.

In the world we live in, the most vile dictators and orchestrators of genocide are hailed as heroes with T-Shirts, posters and memorabilia. Everything they are not! The world is turning itself inside out!

Our society has brought the destruction of the family unit, the blurring of lines between male and female, dumbing down tests for the sake of "equality", preventing children from learning that there are always winners and losers~and worse~failing to teach them that in this life you will experience both and how to deal with it...These are the things that cause me to fear for the future. What are we bringing upon ourselves??

Do listen to the video below~and think very carefully about what is being said...

Thoughtful and To The Point~Paul Joseph Watson Tells the Truth~Are You Listening?

Paris is a Sh*thole

I have a friend who has been blogging for quite a few years in English, German, and sometimes Hebrew.

She has more pictures than you could imagine and has been making small videos of areas around Jerusalem.

I have been encouraging her to do a commentary as she is making the videos to describe the areas. For the most part the videos and pictures are from areas that only Israelis frequent, and usually include events that are taking place in Israeli society.

The areas she films are usually in the old, established areas of Jerusalem. My friend has lived in Israel for about twenty-five years or more and has a wealth of information that I am prodding her to share. If you go to her current blog there are also links to some short stories she has written about Jerusalem and published on Amazon.

Please head over to her Blog~meashearim.wordpress.com/ and have a look around. Leave a word of encouragement or even let her know what you would like to see...

We Should All Be Concerned~This Can Happen To Anyone! 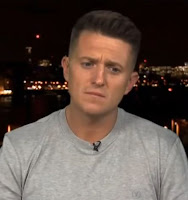 Some are not aware of what has been happening in the UK, while many just consider that it is not their concern. I maintain that this incident is the concern of all free people.

I have followed Tommy Robinson for quite some time now. He started out with the EDL and earned a reputation as a thug. As time past he appeared to have given up the EDL and tried to strike out on his own to bring to light the goings on in his home town.

I am not posting to give a rundown or defense of his life~it is available for those who want to look. Just be sure to investigate all sides of the story, including the ongoing threats and harassment to his wife and children. Take the time to listen to some of the lectures he has given in front of university crowds. This is a young man who is on a mission and is determined to do something for his community as well as his country.

His crusade has been against the grooming of young girls and the danger posed to the English culture by the mass immigration of those who want to replace it. That young English girls have been groomed and abused is not in question. That the authorities are sadly lacking in their pursuit of the perpetrators is another story.

Two months ago, Tommy Robinson was arrested on the sidewalk outside of a court house for live streaming the ongoing trial of a Muslim grooming gang. The legalities of what he was doing still remain to be decided, but the gist of the story is that he was promptly grabbed by a group of police, brought before a judge, tried, convicted and sent to prison for thirteen months~All within Five Hours!!

That must be the fasted verdict since the lynchings of the old wild west. Once imprisoned they quickly transferred him to a prison that contained a majority of muslim criminals~all who would gladly see Tommy Robinson dead.

It took two months for an appeal to be heard, and finally, Tommy was released on bail. Below is his only interview with FOX news, as well as his conversation with Ezra Levant of Rebel Media, who has led the campaign to "Free Tommy Robinson". Please take the time to listen very carefully. He was treated abominably!  If the British authorities are able to arrest, and sentence Tommy Robinson in five hours, why is is that grooming gangs, murderers, rapists, terrorists and other criminal types are running free? Why do their court cases take years and invariably end up with a slap on the wrist! Why do these same criminals get fat and happy in jail while Tommy came out forty pounds lighter (in only two months!)

The free world is facing a destructive political correctness that is tearing societies apart. It is time for good people to stand up and insist the laws of the land be obeyed and insure that those who refuse to enforce them are voted out of office. Action must be taken, but this action must be done within the law and without violence for it to have meaning.

The Truth About Palestinian Jihad~Insanity Walking!

For anyone who protests for the "poor palestinians" and calls Israel an Apartheid State, you need to visit the sites of Pierre Rehov. He has for many years produced amazing films. He goes to the heart of the situation and lets the people themselves speak their minds. This is how the children are being raised!

In a world of upheaval, it is clear that continuation of financial support to the PA, and Hamas only perpetuates the ongoing war. In order for peace to happen, the poor, and underprivileged have to start facing reality. They are brainwashed into believing that killing Jews will bring money and a trip to heaven. It is madness. For those who say, well, I have no love lost for the Jews, listen to the end if the video below~They will come for the Christians next!

Please take time to do your research before you condemn Israel. Start with the documentary films from Pierre Rehov. You will learn a truth that few people are willing to look at~but is it the truth.

I Often Recommend Videos by Pierre Rehov~Here is One That Everyone Must Watch!!
Links to Videos By Pierre Rehov: