We Need To Shout Out~The Emperor Has No Clothes!

Another Great One by Paul Joseph Watson~This is Spot On!

Great Speech! Thank You VP Pence for Helping Us Celebrate this 70~Year Landmark!

I have a friend who blogs in English and German. She lives in a part of Jerusalem that is very close to a large Arab population~an older but very lovely area. From the time she moved in there has been a large cat community. Cats in Jerusalem are everywhere and it is pitiful to see what a terrible life they live. Three years is pretty much maximum lifespan, while most are dead within the first year. There is no neutering program to speak of and when a citizen tries to do something the cost is formidable. The worms are so bad that some have actually had their insides eaten out. Very sad.

Many people can't bear to see starving sick animals so they do what they can privately. As I recall, my friend started out by giving a can of tuna to a scrawny, pitiful looking cat walking through the yard. The end result is several generations who now come to her for sustenance. A couple years ago, during the winter rains, she heard some thumping at the door. When she opened it a rain-soaked cat (with a newborn kitten in it's mouth) ran in and hid under the sofa. She bought a cat carrier and a cat tent and placed them outside by her door for. She has become very good at feral cat behaviour and care. It is very different from domestic house cats.

You can check out some of the stories on her Cat Blog called Saving Jerry She also has some cute videos on her Youtube Channel.

I am appalled at the extreme cost of even the most basic cat food. My friend is far from well off, yet she continues to help. She has even provided medical care at great cost. I try to help when I can but she could use some extra support. If you feel so inclined, please go to her blog and make a small gift to the Cat Family. Several people have helped and she is very conscientious in using everything for the cats. She even takes pictures to document where the funds go.

The latest video of the current family is on her regular Blog, Shearim. Do stop by and have a look...

Here Is One Family of New Born Kittens~Mom Gave Birth on My Friend's Doormat!

The Truth About Popular Culture~A Must Watch!

For some time now I have been trying to put into words what I felt about "so many things" in our society that terrify me. What is the cause, when did this all start?

The video below has summed it all up beautifully! A colleague that I work with told me about Paul Joseph Watson some time ago. I follow his tweets and videos. He is described as a "conspiracy theorist" among other things. That may well be true.

What I can say is that he is focused and strikes to the point. In the case of the video below, this young man has managed to "tell it like it is" very accurately. Some people may find parts of this hard to watch, but I urge you to sit through the entire clip. If you don't see the truth in this, we are truly on the road to destruction.

How refreshing to see a young man with integrity and the guts to "call out" the madness that is destroying all the greatness that has been handed down through the years! Please Do Watch and Think!!

An Arab Muslim in the Israeli Army

Everyone Should Stand for the National Anthem

The Key to Unhappiness~Something to Think About...

Hope the Silent Majority Continues to Speak Out Against the Disrespectful Nutters!
Posted by Orfan at 11/19/2017 09:48:00 am No comments:

When The Refugees Came... 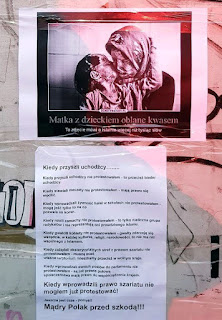 The poem below was being posted on leaflets in Poland. It showed up in various places at the National Day march.

Needless to say it aroused the ire of those lefties who are so concerned about being politically correct they are like the frog in the pot of water sitting on a hot stove...

The poem was posted on  Gates of Vienna Blog...Many Thanks to them for posting this!! This is only one of many good posts on the blog so please visit them.

I think it is important to share this because it truly reveals what is happening around the world. (Note: All Emphasis mine...ed.) As you read it ask yourself this:

"Is There Really Still Time??"

Under the photo at the top of the poster the text reads:


"A Mother with a Child After an Acid Attack"
…this picture says more about Islam than a thousand words
The text  of the poem is translated below:


A Pole is Wise, Before Suffering

*A Word-play on a Polish saying:
“A Pole is Wise, After Suffering”