The Benefits of Old Age~Say What You Want Without Fear! 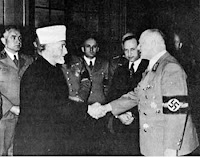 The picture you see is common and well known as historical fact. The mufti of Jerusalem at the time was an admirer of hitler and was known for his ties to nazi Germany.

According to the video below the German courts have sentenced journalist Michael Stürzenberger to jail time for posting this picture in his Facebook timeline. The claim by the judge, essentially, was that a person could interpret the image in a way that was defamatory to islam...(Are They Serious?!?) How do they figure that posting an historical photo is defamatory to a group that has been slaughtering people around the world for years!

For the record, if you do not know about the Grand Mufti of Jerusalem, Haj Amin al-Husseini, do look him up and learn of his love for, and affiliation with nazi Germany. Best to do so before the Politically Correct minions are able to erase his history.

This type of oppression will not end. Unless we stand up for our freedom of speech and our right to our own thoughts we will soon be caught up in the horrors of totalitarian oppression. Those who lived through nazi Germany know well what that was like. What is happening now is much more frightening. The time to speak up is now or life as we know it will cease to exist.

It has often been stated that if we do not learn from our history we will be doomed to repeat it. What is happening in the world around us is a prime example of "refusing to learn from history". Rewriting the history books and creating a "New, Politically Correct History" will not change what happened in the past, or for that matter, stop it from happening again.

Germany has been going downhill for some time. Now, showing a picture from history warrants jail time. Please listen very carefully to the video, read the article at the links below, then join in and  Speak Out for Freedom!

The story is available on Vlad Tepes Blog. You may also read more at Gates of Vienna Blog. Do take the time to visit these sites and educate yourself....

The Conflict Between Poland, Germany and the EU

Is the Death Penalty Ever Moral?

Liberal Academics at Oxford Get An Education

Dennis Prager Brilliantly States The Truth~Are They Smart Enough To Hear It??


* As an Aside:
I Don't know who the pudgy woman in the purple toga is, but it seems she has wasted her money on schooling if she can't figure out who is carrying out all the beheadings in this world. Gd forbid she should decide to instruct anyone on anything!

I wonder what the future holds with this upcoming generation, who are so interested in "political correctness" and doing away with law and morality that they can't even see that they are in the pot and the water is simmering. These people are not prepared to face the world and the harshness of survival and actually having to "earn" your way. They want it all~given to them~right now. They can't have any stress, they must have "safe places".

Instead of facing live they are trying to tear our world apart. What they cannot see is that there is a very large part of the world who are thrilled with these naive attitudes and are more than happy to take over~or simply kill them and take what they want. Islam means submission, and to date they are having no trouble with idiots like this manning the ramparts.

It is time for these people be given a real education and taught "actual" history to learn what happens when stupidity and self-centerdness takes over. Thousands of years of empires destructing was not accidental. There are no "safe places" in Islam~End of Story!