Barbarians Murder and Riot~Silence from the World...

Last Week two young Druze police officers were ambushed and murdered by terrorists in the Old City of Jerusalem. The terrorists were caught on CCTV entering the Temple Mount compound, then exiting with their weapons and attacking the officers. A third officer was wounded.

Border Police Officer Haiel Stawi, 30, was a new father and Officer Kamil Shnaan, 22,son of former Labor MK Shakib Shanan, was about to be married. Israel's Druze community lost two of its finest sons and the entire country mourned for them. Their precious young lives were cut short by primitives, who know only hatred.

This Week on Shabbat evening, three generations of a family were gathered around the Shabbat table celebrating the Sabbath and the birth of a baby boy. Suddenly a terrorist broke in and began stabbing at the unsuspecting party. Grandfather, Yosef Salomon, 70; his daughter Chaya Salomon 46; and son Elad Salomon 36 were brutally murdered. Elad was the father of five young children. His wife, Michal managed to close herself and the children in a room and call for help. Yosef’s wife Tova, 68, was seriously wounded, but was able to recall the horror. How can anyone explain to five young children that their daddy is gone. How can they understand their grandfather and aunt are no more? How does anybody come to grips with the brutal murder of innocent souls at the hands of a barbarian?

Sadly this terrorist was only wounded. He will now enjoy first class care in an Israeli hospital and when he goes to jail all his needs will be met. Most likely he and his family will qualify for a handsome, lifetime stipend from Mahmood Abbas, compliments of  the UN, US, and EU. Eventually he may even be freed in a trade so he can be hailed as a hero and go on to kill again.

For those who say the death penalty is too good for him, I heartily disagree. I could express thoughts about sending his body home sealed in pigskin~but that would not be "politically correct" so I won't.

What was the reason behind these barbaric murders? The officers were killed simply because they were there~doing their job. Ambushed, they had no chance. Totally senseless murders.

The terrorists who ambushed the Druze officers were quickly eliminated as they escaped back into the compound. One played dead, then tried to attack again, but fortunately he was killed. Of course, Israel closed the Temple Mount while they searched and recovered weapons. Prior to reopening they set up metal detectors at the entrances.

Immediately the mufti got his short and curlies in a knot and told everyone to refuse to go through.*Please Note* these same arabs have no problem going through the same detectors that are in place all over Israel in every building and shop. Everyone in the country has to pass through, without exception.

I should also note, these same arabs have no objection to metal detectors in the offices of Israel's Bituach Leumi~where they rush to collect their welfare cheques.

In addition, if security cameras and metal detectors are offensive to muslims then why are there no riots in Mecca? Have you ever seen their security? It brings to mind scenes from NASA.

The truth is, they only object to the security measures that prevent them from stocking weapons in their mosque so they can be used to attack and slaughter Jews.

As to be expected, there were immediate calls for a "Day of Rage", which of course led to many days of violence. Any excuse to kill and rampage. The rioters, many who are skilled at using murderous slings (think David and Goliath) raged through the Old City. Three died during the riots. What did they expect? Should the security forces run? Should they stand and let themselves be torn to pieces?

Oh, and the moron who slaughtered the Solomon family~he claims he did it for Al Aqsa. Really? Their "holy" place where terrorists stock weapons and prayers are full of incitement to "kill the Jews"?? He was upset because weapons are not allowed in the gates~and for this he kills three innocent people?

As for the world at large~Israeli flags were burned in London, calls that Israel had crossed the red line from arab countries, and the usual blather, ad infinitum. Not a word about the arab incitement or that they should consider trying to live in peace! These murders were never about metal detectors and security. Like every other attack, this is just another excuse for primitive barbarians to slaughter Jews. It's time to put an end to the madness!
Posted by Orfan at 7/23/2017 02:20:00 pm No comments:

A New Prayer for the IDF

A new prayer for the Israel Defense Forces has been approved.

The prayer is basically the same, except that it includes the addition of the police and security forces who stand guard each day and night in our cities and towns.

I for one am very happy to include these faithful men and women who I see daily, doing their job to protect us from harm. Just one year ago I was witness to their bravery when a terrorist attempted to carry out an attack on the light rail in central Jerusalem. You can see the pictures and read the story HERE. The young men on security duty insured that the only ones exposed to danger were themselves~truly awe inspiring to see how fast they secured the situation.

I do not have a copy of the prayer in Hebrew, but here is the English version. I keep this with me at all times and have a blown up copy in my house. May Gd Bless all the precious men and women who make life possible for us.

Prayer for The Israel Defense Forces

He Who blessed our forefathers Abraham, Isaac and Jacob~may He bless the fighters of the Israel Defense Forces, the officers of the Israel Police, and those who serve in Israeli security forces, who stand guard over our land and the cities of our God, from the border of the Lebanon to the desert of Egypt, and from the Great Sea unto the approach of the Aravah, on the land, in the air, and on the sea.

May the Almighty cause the enemies who rise up against us to be struck down before them. May the Holy One, Blessed is He, preserve and rescue our fighters from every trouble and distress and from every plague and illness, and may He send blessing and success in their every endeavor.

May He lead our enemies under our soldiers’ sway and may He grant them salvation and crown them with victory. And may there be fulfilled for them the verse: For it is the Lord your God, Who goes with you to battle your enemies for you to save you. And let us say, Amen.
Posted by Orfan at 7/20/2017 11:32:00 am No comments:

Why, you may ask is this important at all? To begin with, you must look into the OIC (Organization of Islamic Countries) You should know that they have done a great job of cleaning up the site to make it more appealing to "western" sensibilities, but the core of what they stand for is still there.

The site states: Organization of Islamic Cooperation (OIC) was set up following the arson attack on the Holy Mosque of Al Aqsa on 21st August 1969. The fire was attributed to an Australian tourist who was a Protestant follower of the Church of God. This had nothing to do with Jews, in fact, in 1967 when the mufti came to hand over the keys to Moshe Dayan, he (stupidly) handed them back. I suppose he believed that this would be the beginning of an era of peace, in reality, it was the start of endless wars. Since then any damage to the "mosques" on the Temple Mount has been the result of rioting muslims. As an aside~when muslims pray on the mount, they bow to mecca with their arses facing their precious mosques. Mull that over in your mind.

The OIC goals for the rest of the world are not much nicer. Do listen to this interview with former CIA, Brad Johnson on the excellent blog, Vlad Tepes. I strongly suggest you take the time to listen.

Finally, you need to know just "who" Omar Alghabra is. All the details are in the video below. If you are Canadian and value the country Canada has been for the past 150 years, you will take the time to listen. Think about what your PM is doing. Perhaps he hopes to bring in enough future voters to allow him to implement his policies for a "utopia". What he is really doing is opening the doors to turn Canada into an Islamic state. Think about it...

Canada Has Gone Over the Edge...

This is So Disgraceful~I Have No Words! 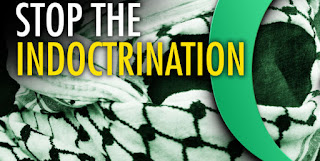 Canada is starting down a very slippery slope.

If the school system is allowed to continue putting "thier" ideas into the minds of our children we will have a disaster within the next decade.

At a time when children should be learning to read, write, do basic maths and geography, they are being peppered with political correctness, bias and in this instance, outright lies!

Give me four years to teach the children
and the seed I have sown will never be uprooted...Vladimir Lenin

The above quote and many that are similar in context rings true. Those who are given the authority to mold the minds of  children from very young will have sown a seed that will not be easily dislodged. If you wonder why there is so much upheaval in society today, just look back at the education system of the past decade. We have sown the seeds.

I have a hard time watching this particular announcer~But~I do agree with what she says. Please take the time to listen and learn how children are being brainwashed in the schools. Go to the website stoptheindoctrination.com and sign the petition. It only takes a few minutes to Stop the Madness!