This is For All The Criminal Migrants:

I Can't Think of Anybody Better Than Pat Condell to Speak the Real Truth!


* YouTube has placed restrictions on this video. You can watch it at the link below... 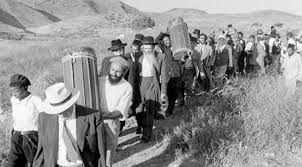 I have a very dear friend who survived the Shoah with her mother and two sisters. Her teen years were spent in Auschwitz.

Rather than let the horror of the evil she lived through take over her life, she went on to marry and raise an amazing family of her own. At the same time she returned to school and eventually became a psychologist. She made aliyah and dedicated herself to working with those suffering trauma~especially victims of the Shoah and their families.

She  told us a story of a visit she was asked to make to a seniors living facility in Israel. The residents were not Ashkenazim from Europe, or even Sabras (native Israelis). They were Sephardi Jews who had lived in Middle-Eastern countries occupied by Arabs~countries such as Iran, Iraq, Egypt, Syria. Libya, Morocco, Yemen, Tunisia and other areas.

As she greeted the people she told them a bit of her own story. She acknowledged that they most likely could not identify with her tribulations and asked if any of them had ever gone through trauma during their lifetimes.

What followed was a flood of stories about the persecution and ethnic cleansing of the Jews from the Middle-East. These people had carried the horror of their escape and expulsion all their lives and very few people had heard of it~or wanted to hear of it! It is a story that even our own government in Israel has not given a loud enough voice to.

More than a million Jews were expelled between 1946 and 1974~over a million "forgotten" fugitives viciously expelled from the Arab world. More than a million suffering, destitute souls whom the world tried to forget, while the victims themselves quietly accepted their fate as they struggled to reach a safe place and begin their lives again. For thousands of years Jews had been living in Arabic lands. They were there before Islam, and they remained, accepting their fate and being thankful for the miracle of their survival.

The beginning of their exodus, 1948, coincided with the birth of the State of Israel. While Arab armies were preparing to invade the young refugee-country, and survivors of the Shoah were cramming into leaking "ships" to return to the land they had prayed to return to, a few hundred thousand Arabs from the former "British Mandate of Palestine" were getting ready to flee their homes~convinced that the Jews would be pushed into the sea, and they would return as conquerors and "take it all" .

They filled up camps built on their "brothers" land, but because of their refusal to integrate~and their brother's refusal to let them~they continued to pass on their refugee status to the next generations to this very day. A few hundred thousand has become over seven million! Seven million "refugees" who have their own UN agency, the United Nations Relief and Works Agency (UNRWA) to feed and care for them with billions of dollars from western countries. Unlike others, they never give up their refugee status and remain willing pawns to be used by the Arab world in their efforts to wipe Israel from the face of the earth.

The Jews from Arab countries did not get any special status~or any status at all for that matter. They had lost everything including relatives, memories and the very graves their ancestors were buried in. They never asked for compensation, a right to return, or even made a fuss to have their story told…

There are many blogs where you can find facts and information on Jewish refugees from Arab countries. One of my favourites is Point of No Return. Another great source is Pierre Rehov. His films dig deep below the surface to reveal the truth. I urge all to watch the movie below and learn more about the "Silent Exodus". Hopefully, one day, the truth will be known...