Israel's Borders: The Partition Plan and Beyond

Benghazi Was Planned~Americans Were Left to Die...

I'm Really in Need of Some Smile-Time this Week...

Cuteness With A Happy Ending...

Next Time You See A Fireman~Smile And Say "Thank You" For Being There...

How NGO's Manipulate Facts Against Israel and the IDF

Should Nir Barkat Be RE-Elected as Mayor of Jerusalem? 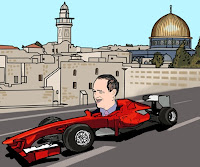 This information was sent to me in an email. Everyone who has voter status in Jerusalem needs to think carefully~We Must Not Elect Barkat! Barkat is great at catering to the very rich, but he is driving the ordinary people out of Jerusalem. Housing and jobs are a disaster. Illegals are flowing in, Shabbos is being desecrated and it is unsafe even on Shabbos to walk home alone after dark. As elections run today, please Think...

If Jerusalem is important you, you need to think about whether Nir Barkat should be re-elected. It's time we elect a mayor that can take care of Jerusalem and keep it an undivided Jewish city. Here are a few facts that give a better picture of the real Nir Barkat.

[1] As mayor of Jerusalem, Ehud Olmert demolished more than 100 illegal Arab homes per year. Uri Lupolianski demolished  around 80 per year. In his 3 years as mayor, Nir Barkat has demolished an average of 11 per year and~in contrast, Nir Barkat destroyed  66 illegal Jewish Homes in 2012 alone!

[2] A plan for 10,000 Jewish housing units in the east Jerusalem neighborhood of Atarot was jointly planned by Uri Lupolianski and the infrastructure ministry. But Nir Barkat shelved the plan.

[3] The Shaar Hamizrach project envisioned by Shmuel Meir z"l and supported by both Olmert and Lupolianski, was trumpeted by Nir Barkat during his campaign as "a solution for students and young people in Jerusalem who have been hard-hit by the shortage of affordable housing in the city". The area was rezoned as a garbage dump a year after Barkat took office.

[4] In 2011, the city of Jerusalem allocated municipal funds to supply Christmas trees to residents. The giveaway was announced by several Santas ringing bells at the Jaffa gate of the Old City.

[5] Barkat appointed Meir Margalit (Meretz) as head of East Jerusalem affairs. Margalit represents the most extreme leftist fringe in Israel. Appointing Margalit to this position indicates that Nir Barkat trusts him to carry out his own vision for East Jerusalem.

[6] Religious Zionist voters are tired of politicians that put on a right wing Zionist costume before the elections. This is what Barkat did during his last campaign and he will do it again. He was head of Kadimah Jerusalem during the "Disengagement" and is advancing plans to hand over Jerusalem neighborhoods to the PA. This is the first time that a mayor of Jerusalem has agreed to surrender entire neighborhoods!

[7] Nir Barkat periodically makes gestures that are spun as "Pro-religious Zionist" such as his move to have a Zionist Chief Rabbi appointed. In the end, he's motivated more by hatred of Haman (Hareidim) than by love of Mordechai (Religious Zionism).

[8] Nir Barkat has his minions calling people in a certain age bracket and offering to pick them up to drive them to the polling station if they will vote for Barkat. He is one of the richest politicians in Israel~money talks, and buys votes.

So when you listen to what Nir Barkat says, remember what he's done. He'll say anything to get our vote. We don't need that kind of mayor. We need someone we can trust to do the right thing even when they aren't campaigning; someone who does the right thing, just because it's the right thing to do.
Posted by Orfan at 10/22/2013 11:55:00 am No comments:

Overwhelming Proof That Schools Are Failing!

Obama is Supporting These Guys~Remind Me Why?

No Wonder America is in Trouble...

The Origins of Hatikvah~How An Anthem Was Born

Most of us are familiar with the Israeli National Anthem~Hatikvah (The Hope). Not many know (or even think of) its origins. One Israeli, classical musician Astrith Baltsan, did think about it, and for her it became an eight year quest to track the origins and sources of Israel's National Anthem. When her research was complete, she decided to share her findings via a book and a concert~lecture. In the clip below she explains that the two hundred page book (which includes two CD's with three hours of music) was produced by the Ministry of Education and is used for the matriculation exams in Israel. It is also used at the officers schools in the IDF.

There are those who like classical music and then there are others~each to his own, as they say. Perhaps, there can also be a blending of tastes. Many musicians over the years have tried to bring the genres together. Singers like tenor Mario Lanza crossed into popular music and movies, and to this day has a following. The incomparable Luciano Pavarotti and his appeal to wider audiences came to attention with "The Three Tenors". Pavarotti went on  to make amazing music with rock and pop stars such as Let it Rain with Jon Bon Jovi, the ballad Live Like Horses with Elton John, and the beautiful Baby Can I Hold You Tonight with Tracy Chapman. (Follow the Links~You May Like It!) 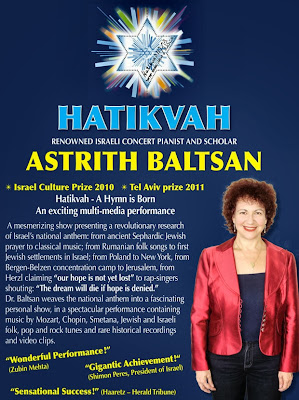 Back to the Israeli musical world and the phenomenal, Astrith Baltsan. She has developed an imaginative story-telling style for her chamber music lecture-concerts, Classica be-meimad ishi (Classics from a Personal Viewpoint).

Using a combination of music, imagery and story-telling, Astrith is able to explain, enlighten and entertain with musical history and facts. Her unique entertainment style has filled concert halls with a new type of audience, who have laughed, cried, learned, and gained an appreciation for the classical side of music. Astrith Baltsan's "concert~lecture" series has become the largest classical chamber music series in Israel, and she takes her concerts around the world to the delight of all.

Hatikvah is one of five programs that Astrith created with the Israel Philharmonic Orchestra, directed by Zubin Mehta, and televised by Herzliyyah Studios for the Israeli Education Channel (2000–2002).

Below, you can listen as Astrith tells of her investigation into Israel's National Anthem (Hatikvah), and the discovery of the history behind it. You will also get a glimpse of the personality of Astrith Baltan, and just a hint of her amazing talent.

* At the bottom of this post are the words to Hatikva~for those who are not familiar with them...Enjoy!

Hatikva (The Hope)
As long as deep in the heart,
The soul of a Jew yearns,
And forward to the East
To Zion, an eye looks
Our hope will not be lost,
The hope of two thousand years,
To be a free nation in our land,
The land of Zion and Jerusalem.
Posted by Orfan at 10/02/2013 01:22:00 pm No comments:

A Muslim Praises Israel vs the Muslim World~Powerful!

Always a Good Speaker, Bibi Stated that "Israel Will Stand Alone if It Has To"