Netanel Yahalomi~Each Life is As A Whole World 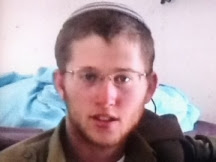 As we enter into the days before Yom Kippur, there is a family that will shed real, bitter tears.

For the Yahalomi family, it truly is as if a Whole World Has Been Lost.
Cpl. Netanel Yahalomi, only 20 years old, was murdered by Egyptian terrorists on Friday, 21 September 2012.

Netanel Yahalomi, was the third of Shmuel and Tova Yahalomi's six children. He was in a hesder program at the yeshiva in Ma'alot (hesder combines army service with yeshiva study). His nickname was "Halakhic Man"~after a well-known book by Rabbi Joseph B. Soloveitchik that describes Soloveitchik's view of how the ideal religious Jew thinks and acts. Only a microcosm of information for "a whole world".

Netanel was guarding the border and the security workers building the fence between Israel and Egypt. He was protecting our border so we could sit in synagogues and enjoy our Shabbat meals with our families and friends.
Netanel Yahalomi was murdered because IDF soldiers are humane. As the soldiers  took water to Illegal African infiltrators (They are NOT Refugees), the terrorists, dressed in civilian clothing, attacked.

I do not know Netanel or any of his family, but I weep for him and for them. I am angry, because the weakness of our government makes our enemies bold, and our young men and women die. The haters, the leftists and anarchists who support tyrants, terrorists and those who crush freedom, will be calling him names because was Israeli and he served his country, Israel. They will celebrate the loss of an innocent life while screaming against the death of barbarian terrorists. Hate has no bounds, no honour and no sense.

Take a minute of your day to remember Netanel Yahalomi~Remember the young boys who brought water to infiltrators because to a Jew, each life is as a Whole World. Remember that Netanel Yahalomi was murdered for~~For What?...Baruch dayan ha-emet
Posted by Orfan at 9/24/2012 08:06:00 am No comments:

A Word to Rioting Muslims 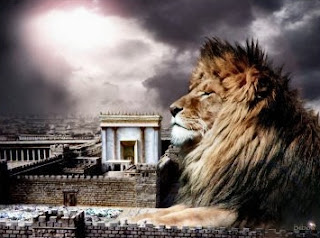 URGENT NOTICE !
On Sunday, 23 September 2012 (07 Tishrei 5773) there will be a Simultaneous World Wide Jewish Prayer for Peace through the coming of Mashiach, as announced in our tradition.

This unique event in Jewish history has been initiated by motivated Jews with the help and blessings of rabbis from all affiliations around the world, Ashkenazim, Sephardim and Hasidim, with a strong desire that all Jews will be united at the same instant, observant or not, whatever beliefs, affiliation, age or nationality~to end all suffering and to welcome the revelation of Hashem's Name. The idea comes from the Chafetz Chaim...


If only thousands and millions of sincere Jews
would show G-d that they truly desire Mashiach,
He would surely come at that moment...


The time to recite the prayer is based on Israel Time~23 September @ 17:00. This LINK will take you to the video about the event, or you can watch it below. At the end of the video are the times for areas around the world.

Please Mark the Time in Your Area...
Stop Wherever You Happen to Be...
Put Aside Something for Tzedaka...

And Recite This Short Prayer:

"Master of the World, We the children of Israel ask for Moshiach
to redeem us now and with mercy from exile and all suffering
to reveal your Name in the world and to bring peace...Amen"

Be Part of the World Jewish Community for a few Seconds! It Won't Hurt...So Join Us!

* To print a flyer, copy the prayer or a text message In Your Language Go To:

* The Flyer in English is Below the Video 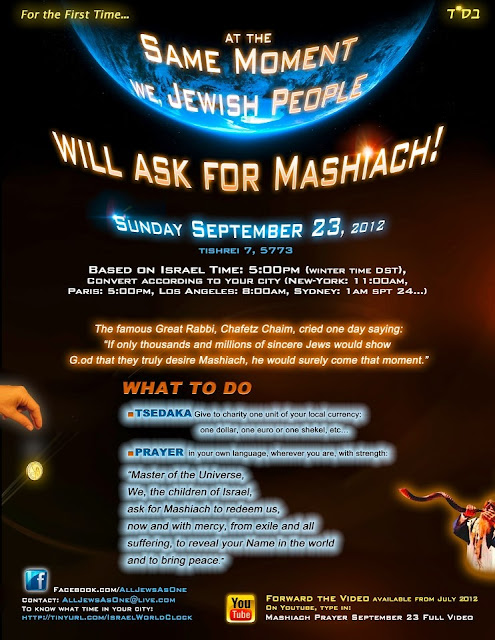 The Weakest, Most Ineffective President~Ever!

I am constantly amazed when I meet people who are so infatuated with Obama, that they will not hear a single word said unless it is in "praise" of him. What amazes me the most is that these are for the most part, level-headed people.

Once again this weekend the subject arose, and almost immediately, I was told that I had nothing to say "because I was Not American". I may not be American, but I still feel I have the right to voice my opinion. I am Israeli, and the actions of this pResident have put my country in grave danger. Even though Mubarak of Egypt was "not a nice man" there was a peace of sorts between our countries, trade and tourism was doing well and the Sinai was not a hotbed for terror. All that has changed and more.

So, while I am told I have nothing to say, I believe this man does. As a Member of Congress and a retired officer in the US Armed Forces, Allen West is well qualified. He speaks the truth and will not back down. Like I have said before, ya gotta love Allen West!

Watch and Learn~It Was NOT About the Movie!

Bibi Netanyahu~Waiting Until When? And For What?

Muhammad Movie~Death and Destruction for This? 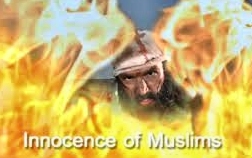 I debated posting this "video", as it is (in a word) "complete stupidity". That the Muslim world is up in arms, murdering and killing over it is beyond stupidity.
The "producer" and I use the term lightly, is supposed to be an Egyptian Coptic Christian. To be honest, I would be inclined to to credit this farce to a muslim~it totally reflects their primitive mind set and provides what they would consider a reason (as if they need one) for more killing and rioting. The Copts, on the other hand, are under such persecution I really question that they would want to increase the attacks.
The "trailer" was released over six months ago. Nobody even noticed it. Suddenly with the approach of 9/11 the Muslim world is in an outrage~well, they are always in an outrage, but I digress. The burning of flags, storming of embassies, and barbaric murder of innocents is beyond contempt. To blame it on this joke of a film is beyond description.
If you can stand to watch the whole thing, here it is. Now ask yourself~how on earth does this bit of mindless nonsense give Muslims the right to brutally murder and desecrate the body of United States Ambassador, J Christopher Stevens?
Innocence of Muslims~Stupidity at Its Finest...
Posted by Orfan at 9/19/2012 04:13:00 pm No comments:

Shana Tova from Women in Green

* To learn more about the Women in Green go to their Website:

A Rosh Hashana Song from Latma

The "Untold" Story of Islam~What Is It Really? 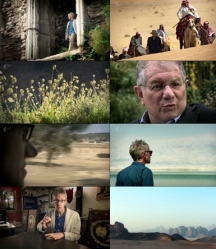 Once again, freedom is being stifled. This time, it is in the form of an historic documentary, prepared by Tom Holland. It seems the program has been pulled because of complaints.
Mr. Holland does not appear to be a religiously inclined person, rather, he is deeply interested in research and finding "truth"~although it is often elusive when dealing with the past. In addition to his books, Mr. Holland has adapted Herodotus, Homer, Thucydides and Virgil for BBC Radio 4. He is not some fly-by night story teller.
I watched the film and personally found that Mr. Holland has handled the subject with thought and sensitivity. He is Not "singling out or bad-mouthing" Islam~or any other religion for that matter. He seems genuinely interested in presenting the historical truth. He actually visits the Middle-East in his quest, showing us a glimpse of some amazing scenery in the process. I found the film interesting and worth watching~and there is nothing worse than, (or even as bad) as documentaries about other religions.
The fact that one group of people is allowed to threaten violence and force a program like this to be pulled from viewing is a very dangerous and ugly precedent. Documentaries on Christianity, Judaism, Buddhism and every other belief are presented on a regular basis~some are just plain ugly and vicious. This film is none of those things. When we, as free people are prevented from honest examination and discussion of our world and its history it is time to take stock of where we are headed! Kudos to Mr. Holland and Shame to Channel 4 for submitting to barbarians and terror tactics. I Highly Recommend Watching the Film while it is available.
* Thanks to Blazing Cat Fur for posting the film

Although it has been eleven years, the horror of 9/11 is still fresh in my mind. My radio was on very low but I was not really listening. I remember hearing "World Trade Center" and "planes", but it did not register. In fact, I thought it was some kind of play~after all these things didn't happen in real life...
My mind could not grasp the idea of planes flying into the towers, or the pentagon.  Oh, how things have changed...
Over the years there have been endless stories, movies, compilations, theories~you name it. There are those who still suffer,  those who are trying to "cash in", those who swear it was an "American-Zionist conspiracy" and those who, to this day, celebrate and glorify the barbaric attack. Those who were behind this attack feel they are winning...becoming stronger. These are a species who see human kindness as a weakness. They rejoice in brutality and glorify death. Their goal is to "rule the world". Remember~they danced, and passed out sweets as thousands of innocents died.
Our freedoms in this world are a precious gift~given to us by those who fought and died so we could live. We must not allow them to be hi-jacked!

Another Word on Canada's Police 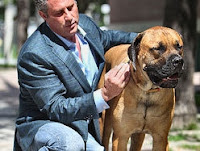 Earlier I wrote about the disgraceful behaviour of the Toronto Police at the Queen's Park rally Hate Fest. There are many articles and video clips regarding this incident and many opinions to be read from both sides.
From my point of view, I believe the Toronto Police have set a dangerous precedent. Put aside the fact that this annual gathering is an Iranian backed function, Hezbollah flags are flying and the calls for the genocide of the only Jewish state in the world. While these are despicable, there are other dangers, much more odious.

The "Canadian" police are adopting a politically correct attitude, whereby they ignore the facts of any issue. Therefore, a Jew gets punched and they arrest the Jew. When raiding the home of a Muslim bomb-maker, they are supposed to remove their shoes, and sniffer dogs can't be used because they are offensive to Muslims!