The Yad Vashem Holocaust Memorial project has marked the passage of 50 years since the trial of Adolf Eichmann, one of the major planners of the Holocaust genocide, by uploading footage of the entire trial to You Tube. The story is available on Arutz 7 HERE. Eichmann was put on trial in Israel in 1961, after having been captured by Israeli agents in Argentina. He was found guilty, and was put to death in 1962.
There are still many survivors left but the numbers decrease each year. When they are gone--who will remember? The Museum Complex at Yad Vashem--the result of years of meticulous work--has gathered the pieces of people's lives to establish a permanent record of those who lived and died during the Holocaust, so that the world will never forget. One cannot come away from Yad Vashem the same as they were before. 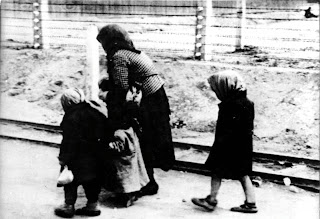 I have had the privilege of studying  with and developing wonderful friendships with several survivors. One woman who I love dearly has on occasion told of incidents during those times.  I remember a story she told of the transportation  of her entire village to Auschwitz-Berkinau death camp. On arrival she remembered  being driven out of the cars and separated into groups. As she stood with her mother and sisters on the platform she saw her  neighbor, carrying her belongings, walking along the tracks with her children. My friend said she remembered it as being such a  "peaceful scene"--they walked slowly, calmly. Only now, these many years later did she realize that it was the last walk they would take, because at the end of the track was the gas chamber from which they would not return. She recalled that at the time, nobody had realized--nobody had guessed...
Eichmann Trial~Session #113~The Attorney General's Closing Statement
Posted by Orfan at 4/11/2011 09:07:00 pm